we are all prodigals

Inside the Hermitage Museum in St. Petersburg, Russia, is what most experts call Rembrandt van Rhin’s greatest masterpiece, “The Return of the Prodigal.” Books have been written about it, and art classes have revolved around this painting. It has been called one of the ten greatest paintings of all time. With hundreds of other tourists, I recently stood in front of it and tried to take it all in. To see the artist’s crowning skill and feel the deep meaning, so full of contrasts, power, and emotion. 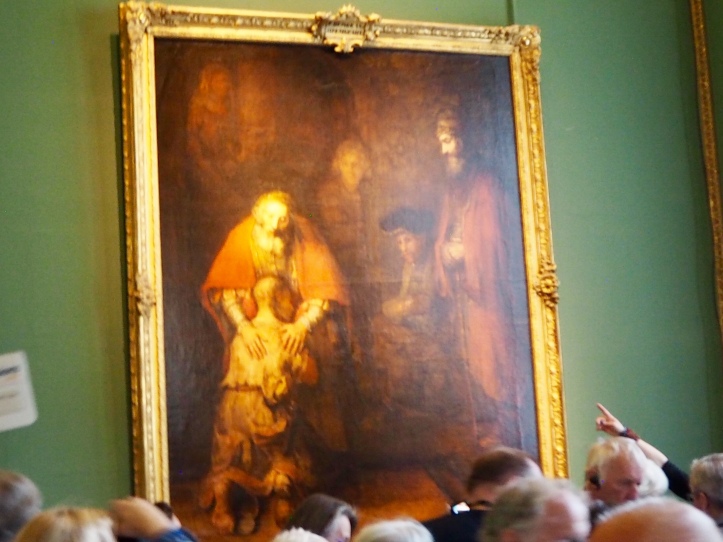 It is Rembrandt’s visual telling of the parable of Jesus from Luke 15, often called the story of the prodigal son. Most of us know the story. The main characters are clear in the picture: the prodigal son, the father, the older brother. Other figures observe quietly–his mother, the estate manager or a village elder, perhaps?

Jesus tells the drama this way: after renouncing his father, a young son asks for and is given half of his family’s estate. So many unanswered questions arise from this drama. How much pain did this cause the mother? How many arguments took place, trying to talk the son into staying? What did his older brother say as he watched him pack his bags? Why did the father give him his inheritance early? What kind of embarrassment did this cause his father? Did his father try to hug him when he left?

All this is unspoken, imagined. With this large bank-roll, he leaves everyone behind and goes off to live the wild, unrestrained life. After some years of debauchery, shamelessness, and self-indulgence, the son finds himself alone and penniless. He is empty and hungry–so that even pig slop begins to look good. He remembers home, and although he has intentionally burned all of his bridges with his family, he knows that even servants in his father’s house eat well. He returns home, broken. But his father sees him, and runs to embrace him. 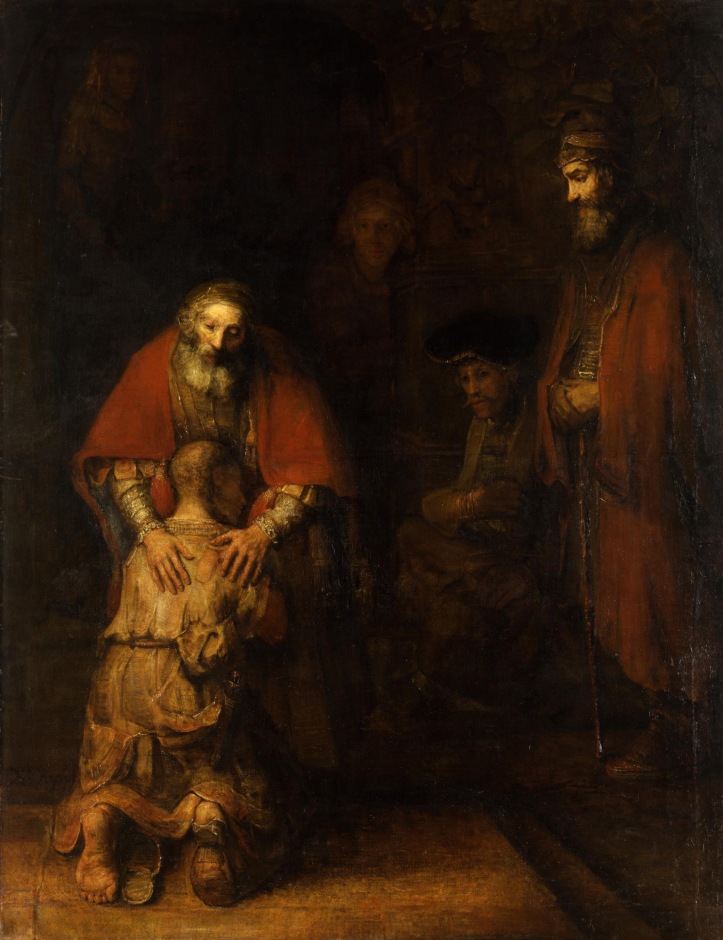 Rembrandt paints the first moments of connection. Returning at night, the son has hastily fallen on his knees, losing a shoe in the process. His once fine clothes are worn and full of holes, held together by a simple rope for a belt. His body is gaunt, his head and beard are shorn in shame. His face is almost lost in shadow. For Rembrandt, he is an exhibit of the fully-tattered soul. The feet, lit in the foreground, intentionally draw us into the scene. We are to identify with this lost child.

The older brother is shown standing to one side, wearing fine gold-encrusted robes. His response is one of judgment. A small distance stands like a moat between he and the younger brother, and he stands above him. His hands are clasp in judgement, with his shoulders and jaw set in stone. Rembrandt shows no movement at all toward his wayward sibling. He misses what his father sees–a dead child has come home alive.

Questions hang unanswered. Does late repentance wipe out a life of debauchery? Should not the virtuous son be angry at the pain created by his wasteful younger brother? Is justice really served in this story? Are there not some monumental hurts which should not, cannot, be repaired or forgiven?

The father, dressed like the older son in red expensive robes, has a choice to make. The younger son has dishonored him, almost wishing him dead with his impatience for the inheritance. In the relational-based culture of Jesus’ day, this is an extraordinarily deep affront. He has grieved the family, and made horrific choices. Rembrandt shows the father’s face wizened with age, and highlights an almost regal authority. There is no question who is lord of the house here. All the others in the room hold back (even the mother in the shadows) and life seems to pause for this moment. What will the father decide? Everything hangs in the balance.

Here is the most powerful and insightful part of The Return of the Prodigal for me. The father’s face is the brightest place in the painting, the focal point, with wise, relaxed features. Quietly, he looks down at his returning, tattered son. The father, even now, knows the full cost of his son’s rebellion. He reaches out to the kneeling boy. Rembrandt sees the father welcoming the son not with exuberance, but with tenderness. Not with violent grasping or clinging arms, but with a tender motion, gently pulling the son’s face tight into his chest. The father literally enfolds the son. The right hand is painted more delicately and laid with gentleness, while the other hand seems stronger, holding more firmly to his son’s shoulders, pulling him in. We can imagine a father holding his sons this way many times as small boys. In mercy, the father shows that real love endures. It is the picture of grace at work. It is the nature of the father to love and forgive his children.

Rembrandt so perfectly underscores God’s grace. The point here is that divine justice has its own criteria. God welcomes prodigals. It is not about “fairness” or “justice”–as if we can ever measure out what these terms mean in the complexity of human life. It is not even about the level of sin or rebellion, or the length of time the poor choices have stolen. It is not about a family’s pain. It is not even about the son’s repentant attitude. His tattered back is what we see, not his sorrow. For Rembrandt, the parable is about the Father’s nature. He is the focal point. His face full of light, mercy, love and grace.

Rembrandt does something else interesting in this painting of the Prodigal. There is no religious symbolism, no divine presence, no dove or angelic onlooker–not even a bright light source. He avoids servants bringing new clothes and rings. It is as if Rembrandt wants to move beyond the religious story into the reality of the forgiveness moment, the touch-point of grace, and hold us there in the awesome quiet. To make us feel the reality of the moment. Why?

Well, because Rembrandt is the prodigal son, too. If you read of his life, you will find a sad tale. He married a wealthy Dutch woman named Saskia. A devout wife, she brought Rembrandt into her church, and by all accounts she loved him deeply. She gave him a place to start his career, and his fortune soared in Amsterdam. People lined up to get his paintings. But three of their four children died early, and Saskia died after the birth of their fourth, a son. Not long after her death, Rembrandt painted himself as the Prodigal son, drinking and carousing in The Prodigal Son in a Brothel. The woman sitting on his lap is his dead wife, Saskia, adding a mournful decorum. 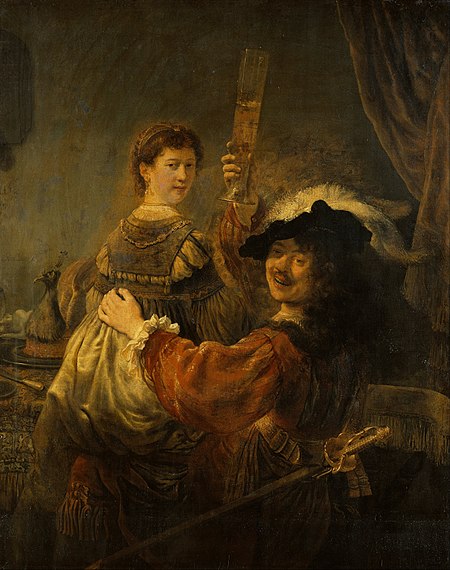 In grief or rebellion, Rembrandt sought the wild party life. Soon his money ran out. He lost his house, fathered a child out of wedlock, and his paintings stopped selling–perhaps because his darkened reputation kept people from having him paint for them. Churches refused to hang his works. He was estranged from all that had been good. Rembrandt understood this parable of Jesus at a gut level. He had to paint it this way. He, too, is the prodigal son, needing home. Rembrandt seems to find deep peace with this painting, as if everything is finally set right. He, with the prodigal, accepts the Heavenly Father’s embrace. It is Rembrandt’s own head brought tight to the father’s chest.

For Rembrandt, his Return of the Prodigal Son is his own story, painted near the end of his life. Rembrandt, like all of us I think, hungered to finally come home. And he found that waiting for him was a Father full of love, mercy and grace. This is the point Jesus, and Rembrandt, want to make. We have a Heavenly Father who waits and looks down the road. The Father waits, longingly, for each prodigal. Who is waiting even now.