How lonely are you? Here’s a self-test to find out. 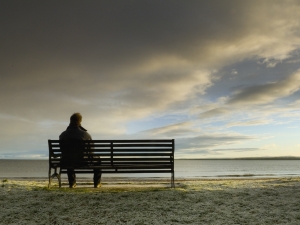 “A man is not only alone; he also knows that he is alone.” – Paul Tillich, The Eternal Now

Today, I am lonely. I recently saw a poster of a man sitting alone on a bench. It contained a truth: “The biggest disease known to mankind is loneliness.”

I am an extrovert, a people person. To my children’s frustration, I talk to everyone. Maybe a side effect of this is that when I am alone, I quickly feel lonely. Several of my adult children are introverts. They love their space and alone time. But they get lonely sometimes, too.

Recent research shows that loneliness is an epidemic. Roughly 20 percent of individuals—that would be 60 million people in America alone—feel so isolated that they claim loneliness as the major source of unhappiness in their lives (Patrick and Cacioppo, 2008). Some of our most idolized people, like Robin Williams, Princess Diana, Judy Garland, Marilyn Monroe, Marlon Brando, Stephen Spielberg, Joan Collins, and J.K. Rowling, have admitted that they are “deeply lonely” people.

We move to a new school or job, we lose a beloved pet, we break off a relationship, we aren’t invited to the party. Everyone feels lonely sometimes.  We can all slip in and out of loneliness. Feeling lonely at any particular moment simply means that you are human. The need for meaningful social connection, and the pain we feel without it, are defining characteristics of our species. As importantly, loneliness and solitude are often different. You can be alone and not feel lonely, or be horribly lonely while in a crowd.

Loneliness becomes an issue of serious concern only when it settles in long enough to create a lasting, self-reinforcing loop of negative thoughts, sensations, and behaviors. When loneliness is the address where we live, or the air we breathe, we have a problem.

Loneliness which is persistent is a big deal. Psychologists note that lonely people report feeling abandoned, depressed, empty, hopeless, and isolated over four times more often than non-lonely people (Russell, Peplau, and Cutrono, 1980, 2010). Feeling alone has been linked to a variety of serious individual and social problems, including suicide, alcoholism, adolescent delinquent behavior, and physical illness. A recent Oxford-Penn State research project concluded that only by finding social connection and acceptance were these psychological problems overcome (Woodhouse, Dykas, and Cassidy, 2012). Even isolated people define themselves based on relationships: those they love, hate, think about, wish they had around, have pushed away, and still miss.

All humans have a desire for connections. Ronald Rolheiser, in The Holy Longing, writes,

This desire [for connection] lies at the center of our lives, in the marrow of our bones, and in the deep recesses of our soul. We are not easeful human beings who occasionally get restless; serene persons who once in a while are obsessed with desire. The reverse is true. We are driven persons, forever obsessed, congenially dis-eased…Desire for connection is the straw that stirs the drink. . . . Whatever the expression, everyone is ultimately talking about the same thing—an unquenchable fire, a restlessness, a longing, a disquiet, a hunger, a loneliness.

A truth: you can not change or solve a problem unless you name it and own it. Healing begins with honest appraisal and diagnosis..

In this spirit, how lonely are you right now? The test below can help.

So what do you do if your loneliness score is too high, and has been for too long? How do you change if your happiness with your social relationships is not good? Are you, right now, feeling lonely? May I offer some ideas which I have found help? Please read my post on Eight Positive Steps to Overcoming Loneliness (coming soon).